Tahlia Sinclair nails the feelings of many AFLW supporters out there.

Ever since the AFLW competition began I’ve been what I like to call a careful supporter.
While at home pushing for my local club to adopt a ‘one club’ mentality to alleviate the divide between the senior men’s and women’s teams, I was very purposefully approaching the Bulldogs differently.
I was proud of my club and wanted there to be cohesion between the players, but I was adamant about supporting them as two separate teams.
The men’s team had let me down for so many years, I had been hard-wired to be a pessimist when it came to the Western Bulldogs. I was at the 2016 AFLM Grand Final and with 1 minute to go was saying ‘it isn’t over yet’ as though we hadn’t already won.
But my girls didn’t deserve that. The women’s team was new, it was fresh, it was a team whom I was over-the-moon positive about. No pessimism here. They were the Western Bulldogs AFLW team and I wasn’t letting any of my men’s team bias interrupt this wave of impeccable Girl Power. 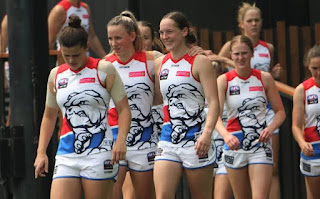 And then, we were good! We were so good we won a premiership! We were the team to beat. The team that everyone was nervous to see. The team that had the players the league wanted to steal *cough Richmond*.
We had a team that was successful and a team that I wholeheartedly believed to win. The Western Bulldogs had a team that I expected to win. I suddenly understood how all my friends felt growing up in Geelong. It was heady.
It was intense, how quickly I became a Bulldogs supporter and an optimist? A truly shocking feeling for a life-long footy pessimist.
It was great, it was awesome. But then we stopped…. Being…. Good…..
Now we’re not that good.
We’re actually kinda bad.
We’re scrappy and lost and look like we don’t know what we’re doing.
It’s shitty for morale and I can only imagine how shitty it is for the girls, but for this long-time pessimistic doggies supporter, it feels so right?
For perhaps the first time I feel like I am genuinely supporting the Western Bulldogs in the way I have always supported football. It’s as though I’ve had this subconscious pressure lifted off my shoulders.
I didn’t want to be a pessimist in 2017. I couldn’t be.
I could not allow anyone to believe I would have any kind of negative association towards this league.
With so much unfair, unjust and downright disgusting negativity being thrown at the AFLW I forced myself to become a supporter that isn’t me.
So now we’re in 2020, the year we’re all going to live our best lives and whatnot, I’m here to support my girls in the only way I know how with fierce pessimism.
Losing sucks, but at least for me, it’s permitted me to be the supporter I’m meant to be.