Footy viewing at the Pub, good food, great company and a big win by the Cats made Friday night a great night - Nikki Clare

Friday night footy in Mackay in March, is not a term I'm overly familiar with. But like many other occasions, AFLW is leading the way in broadening new horizons and creating new history.
So, to honour this new horizon, I created my own first and went to the Pub after footy training to watch the game on the big screen. (No alcohol was consumed by me because I was driving!)
The Gold Coast Suns hosted the Geelong Cats at the Great Barrier Reef Arena that was the perfect recipe for Darcy Vescio to use her talent and wit to describe the match in one tweet with reference to the match and the natural wonder of the world. 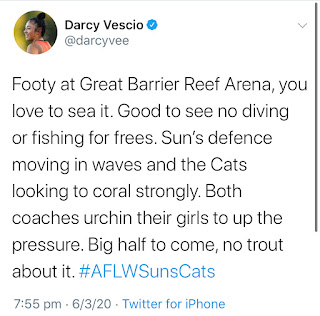 I tipped the Cats but not convincingly, thinking that the humidity would suit their sunkissed rivals of the Gold Coast.
The first half was an even contest and the conditions were certainly playing havoc and the players ability to keep a grip on the footy. The Suns went in with a 1 goal lead into half time. It was good timing as mine and Val's meals arrived and gave us a chance to dig in and discuss junior footy matters.
Phoebe McWilliams was shining for the Cats, I'm still convinced she's going to take mark of the year. Nina Morrison was everywhere and will poll very well in the AFLW BnF this year. 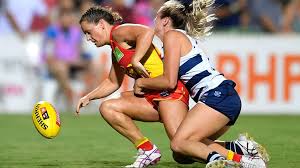 The third quarter saw the Cats come out firing and really applied the pressure. They booted 3 goals 2 behinds to 2 behinds in the quarter to stamp their authority on the game. Again a highlight of a Cats match was a goal by Rocky Cranston who is vying for goal of the year in pretty much every match this season.
The excitement machine that she is and her hardness at the ball, plus those skills really are a delight to watch. (Why couldn't she stay at the Dees??) 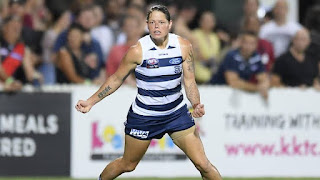 Aasta O'Connor had an amazing match and I was really hoping that she'd kick the leather off the ball when she wound up for a huge kick. Alas she kicked into the player on the mark and it wasn't meant to be.
Meg McDonald as always was solid in defence. I have nothing but praise for Meg who goes about her role in such a relaxed manner. Reading the play, stop the forwards and creating plays herself.
The final quarter had me wondering what the Suns would throw at the Cats to see if they could wrestle back the lead. On a personal note, the final quarter became a scene change for Val and I as a huge family came into the dining area and we couldn't see the TV, so we made our way to the bar area and decided to call the game ourselves as the sound was down.
I was commenting on a missed goal opportunity in the Cats goal square as the player (I forget who) tried to pick the ball up off the ground rather than kick off the turf. It got us into a discussion about how women are taught to play footy. I'm all for kicking off the ground to create space and also marking the ball on their chest at times.
There was a passage of player later in the quarter when the ball was kicked off the ground and to advantage and I exclaimed Hallelujah! See, sometimes it is helpful!
The point that Rocky kicked that hit the post also made for great commentary as we could lip read Rocky's exasperation … We believe she said 'oh dear who put that post there!?' At least that's what the PG version was. 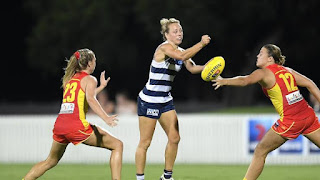 The Cats ran out 20 points winners and backed up their win against the Tigers the week before.
They've found their form and are a good chance at pushing for back to back finals in their first 2 years in the competition.
The Suns, whilst they struggled to hit the scoreboard in the second half are bonding well as a team and really can apply the pressure. Give them a season or two and they are going to be an excitement machine.
This week the Cats take on the Roos on my favourite date of the year Friday 13th. May all the luck be with them! (Sorry Roos fans).
And yes, as I have juniors training on Friday I will be headed straight to the pub again to watch the match on the big screen! 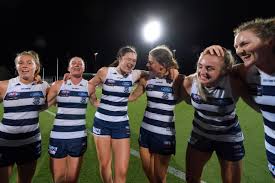