Friday February 28th, 2020, Marvel Stadium. A battle for the ages is about to ensue. No, not the AFLM State of Origin charity match, but the Magpies versus the Demons in game that started at a time when most people are leaving work for the day.
I wasn’t meant to be going to this match with my coaching commitments taking priority but the footy gods were looking after me and the ground was unavailable for training so my plans changed.
I didn’t have to race from work either as it turned out, having to unfortunately take the day off to attend a funeral in Mornington earlier in the day.
Most of you already know that I’ve had – quite frankly – a shit couple of weeks. I lost my best friend that I affectionately called my right hand cat KitKat the week before. Dealing with the loss of a furry family member isn’t an easy time for the best of us.
The week before when the Dees stumbled against the Saints, I wasn’t even sad about that. It was just something that happened. I sincerely was heartbroken for the Dees players especially Maddy Guerin who I have become quite fond of this season and at the same time happy for the Saints to record their first ever win. But if I am brutally honest, my heart wasn’t in it. The result just contributed to my sadness about life that week.
This week leading up to the match I forced myself back into my usual routine and went to watch the Dees train on Tuesday. They looked so determined and so focused on the track, I just knew they would be back on the winner’s list.
Fast forward to Friday evening, I made it super early to Marvel since I caught the train in and clearly have zero idea about travel times. I met up with Em and we wandered around. The Dee Army were amazing in helping me get 2 tickets to the match as I had heard it was a sellout! Amazing news for an AFLW match in Vic. I  knew this day would come!
I got a message from Ally in the Dee Army asking if I could help out with banner duties for the Dees. I said yes, I love being able to help out, even if I have no idea what I am doing. Hold onto a rope? Sure! I can do that. I’m nerdy like that.
I was happy to be at the match, but to get front row seats behind the goals was something else… I was in my element, I felt like a kid again. All giddy inside.
My excitement for this week was partially because one of my favourite souls Lauren Pearce was making her return for season 2020 and Jackie Parry was debuting. I love the way Jackie has been training and her form in the practice match was something else.
The match started off with some similarities to the practice match, intensity from the very first bounce… er… ball up. Eden Zanker started in the ruck and after some confusion, Loz Pearce started on the bench.
The Dees got their first goal through debutant Jackie Parry who joined the elite club of kicking a goal with her very first kick on debut. What a magical moment as that ball sailed over our heads.
The Dees quickly registered their second goal shortly after by a beautiful snap kick on the run through traffic by Kate Hore. That was a great goal. This got me thinking, why aren’t we playing more AFLW matches at Marvel? 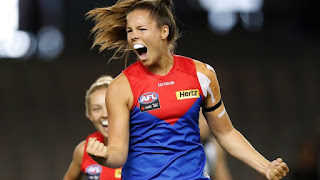 The second quarter saw the Pies get a couple goals back and narrow the margin, but the Dees replied quickly through Eden Zanker.
Going into the half time break, I had a sense that the Dees had the upper hand, despite the best efforts of Sharni Layton and Chloe Molloy. They were everywhere!
The third quarter saw the Dees continue on their merry way and got the Dees faithful behind the goals very excited! We were riding every tackle, handball, kick, mark and goal! Well, at least I was.
We were all collectively heartbroken for Ash Brazill when she went down with what looks like a terrible knee injury. These ACL injuries are really starting to have an impact on the competition. Soon they may name an ACL injury team of the century as part of the history of the comp at this rate. So many talented players are succumbing to the ACL curse.
My two highlights of the night came during the three quarter time break and in the last quarter. During the break the All Star team were out on the ground warming up and having shots on goal at the end we sat at. I managed to mark a ball or two and for the most punch some away. The look of surprise on some people’s faces was priceless.
I got to use my favourite line to some males in the area when it comes to me and footy: It’s alright boys, I’ve got this!
But the biggest highlight for me was watching Maddi Gay take a fantastic mark in a pack in the goal square. It had me bellowing MADDI GAY! THAT WAS BLOODY AWESOME! I adore Maddi. I’m so happy she’s a Dees girl. 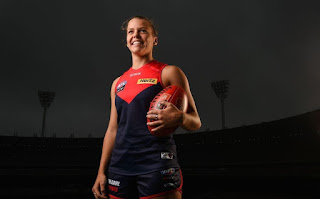 Libby Birch was sensational in defence, I watched the way she read the play and saved some certain goals at times. I was very vocal in my disapproval of the umpire paying a free kick against her in the late stages of the match, apologies to those who had to listen to that… don’t mess with my girls – plain and simple.
The match ended and we were up and about singing the song and wanting to celebrate with the team, alas, this wouldn’t happen because the men just couldn’t wait their turn and were on the ground and hogging the 50m arc. Geez boys, your match was for charity, these girls just played for 4 points!
I say this week in week out, but I am very proud of this Demons team of mine. They play with passion, determination, discipline, but most of all they play with heart and for each other. They bounced back from a loss in a manner that was amazing to watch.
They inspire me every day and this week, if for a brief moment, they helped cheer up this sad sack for a couple of hours. They bring me joy with their enthusiasm and I am so glad they are a part of the red n blue family. 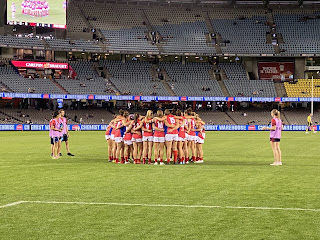