Sunday March 8th, International Women’s Day, a day when the Australian Women’s Cricket Team won the T20 World Cup, but equally importantly it was a day the mighty Demons showed the competition that they’re here to play this 2020 season and will take no prisoners.
It was also the day the AFLW learned the awesomeness of Sinead Goldrick and Niamh McEvoy and we celebrated the return of our favourite Demon Lily Mithen but also an amazing woman’s return to AFLW where she belongs – Sarah Perkins.
The importance of International Women’s Day isn’t lost on me, recognising all women for all they do and for they stand for. I was lucky enough to be able to watch the Dees live and then head straight to the MCG to watch the T20 World Cup Final.
The Demons had to win this match against the West Coast Eagles and win it well. They dropped a match against the Saints a couple weeks prior and those who don’t believe the MFC are the real deal this season were circling, waiting to prove they were right.
Enter one Sinead Goldrick who burst through packs, who made the Road Runner look like an amateur, who is so exciting to watch that you just can’t help but fall in love with her.
The Dees start to the match was like a fairy tale, Perko had the ball within scoring range for the first score of the day, but unselfishly passed the ball to Eden Zanker who was left unattended for an eternity directly in front of goal. Eden kicked truly and stamped her authority on the match.
The game was a physical contest and the Eagles came to play. The Dees second goal came from some Irish magic that I’ve been wishing to see since preseason when I observed Sinead and Niamh carve up the training track. Goldy – my new favourite – burst on the scene, wrenched the ball out of Grace Kelly’s hand at speed and handballed to McEvoy who lined the goals up with a gaelic footy feel and kicked truly.

As far as I’m concerned that’s the play of the Dees season so far.

It set the standard for the day and hopefully the level we can expect for the remainder of the season.
The second quarter belonged to the Eagles, they won the quarter 1.1.7 to 1.0.6, which would become the only quarter they scored in for the match. They really showed some positive signs, their physical attack at a contest or on a player has been noted.
Sarah Lampard kicked her first ever goal for the Dees in the second quarter after a great passage of play. I’d’ve jumped up and down even more if I’d known it was Sarah who kicked it, alas, my shoddy eyesight and lack of scoreboard capabilities at Casey meant I had no idea … 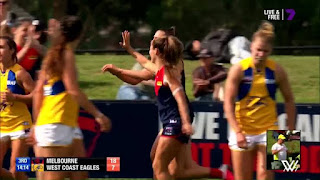 Karen Paxman or PAXMANIA as I like to call her, was absolutely everywhere. I noted in preseason ‘Good luck to anyone who has to tag and keep up with Paxy this season’, she is a running machine combined with the energizer bunny, she just keeps going and going! If she doesn’t win the BnF for the entire competition this year something is wrong with those who vote!
Kate Hore has been having a stellar season, it has to be her best one so far, her attack on the ball and pushing forward resulted in the first goal of the third quarter after some quick hands and a succession of handballs, that looked like a training drill on a Tuesday night at Gosch’s Paddock. (See it pays to watch the training sessions  kids, I’m not a stalker I swear!) 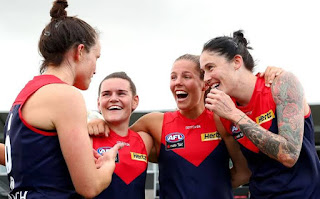 The Dees piled on 5 goals 3 behinds – all of which could have been amazing goals had that oval ball bounced the right way – in the third to break the game wide open. I was right behind Shelley Scott when she had her shot on goal, I knew she would kick it. Timed it perfectly and allowed for the breeze to do the rest. A-mazing!
Maddi Gay was in the firing line for most of the day, which at one point had me saying out loud – don’t you hurt my Maddi! Then realised I was standing around with players family members and friends, and that I don’t own Maddi in any way, shape or form… 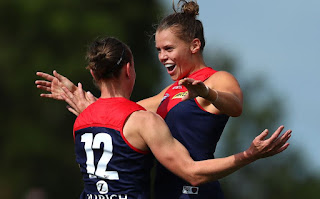 The Irish sensations Goldy and Niamh (I cannot for the life of me remember Niamh’s nickname… help a girl out here people! Sorry Niamh!) were everywhere applying pressure, tackling, causing turnovers. Despite the umpire’s ruling I think Goldy controlled the ball long enough and should have been paid a mark. That could have given her a shot on goal.
Goldy is your crash and bash player and Niamh is your get and go and kick player. The Dynamic Duo or Dublin Duo or Dublin Dees, I can’t quite figure out which suits them better, not the double Dees tho. The way they read the play, apply pressure, bamboozle everyone and push forward, they have to be causing headaches for the opposition.
The other dynamic duo for 2020 is Daisy Pearce and Libby Birch in defence. Whilst I am not a fan of the Range Rover (as associated with the MFC) I prefer these two are the Rolls Royce players this season. Libby’s ability to read the play to mark the ball running back with the flight of it, stopping forward flurries by the opposition is outstanding. We got the recruit of the year there. 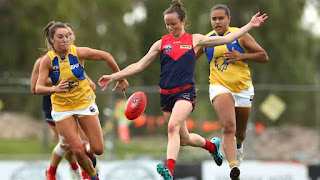 Libby compliments Daisy, and this allows Daisy to go up the field and do as Daisy does – dominate. The defensive pressure Daisy has put on her opponents blows my mind. We all know how incredible Daisy is and it was like someone laid a challenge to her saying she can’t get any better and she accepted that challenge and went above and beyond.
Aleisha Newman was everywhere, Eden played an all round magical game, Elise O’Dea had me giggling when after having a wonderful game herself, kicked the ball out on the full in the final term and exclaimed OH NO! It’s ok, you’re allowed to mess up Junior!
There was some big hits in the final quarter and after a massive tackle on Dana Hooker inside the forward 50m, Elise wore a big shirt front in the middle of the field. Replay shows the Eagles player leave the ground to inflict the bump on Junior, last time I looked at that rule, if a player leaves the ground to enforce a bump on another it’s deemed a charge and a report. But, it wasn’t reported and that’s good, because footy is tough and so is Elise. She got straight back up, shook it off and played out the match.
Lily Mithen took a fantastic mark late in the final term basically a slips catch, possibly channeling the Aussie Cricketers I was nicking off to watch after the match. We all hoped that Lily would finally kick that goal that has eluded her so far in the AFLW. Alas the ball fell short and the Eagles defence spoilt the celebrations and rushed the ball through for a behind.
The Eagles kicked the ball back in but the Dees got the turnover and booted it back inside 50m and Lily took another impressive overhead mark. She could have gone back to line up but unselfishly passed the ball perfectly to Perko who would line up for goal after the siren. NEVER IN DOUBT.
As if it was written by a Hollywood writer, Perko’s return to AFLW was capped off by a goal and the last possession of the day. The crowd left its biggest cheer for that moment and the Dees girls got around Perko and showed her the love. 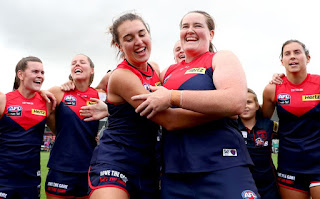 It was an emotional and magical moment.
It was a day we celebrated amazing women and I witnessed the women who inspire me the most, show no mercy to a new side to the competition, who showed to themselves and to the outside world that they are giving it their best shot to be number one in this competition in 2020.
There’s still 3 matches left in the season and a lot can happen in 3 weeks, but this I know, this team has the ‘it’ factor, whatever that it may be, it’s made this Demons tragic a very proud girl.
This week the girls take on the Blues in Alice Springs, this will be a cracking match, whoever comes home with the chocolates will have them placed nicely to play finals.
May the best Demons win!