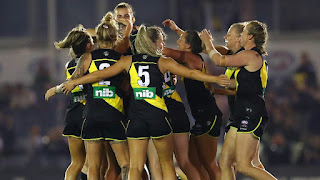 I’ve been a Tiger all my life, certainly all of the life I can remember.

When I was 2 years old, my Granny (my Dad’s Mum) gave me my first footy jumper.

I remember it looking huge and staring at it in wonder.

I’d never had a footy jumper before, not like the jumpers my older brother wore.

But this one was black with a bright yellow stripe across its front and a big number 4 on the back.

My Granny told me all about that number 4. It was the same number worn by her favourite player at the time - Royce Hart.

It was June 1977 and though I didn’t know it (nor did I care at the time), following the Tigers would prove to be an exercise in frustration for 37 of my now 44 years on this Earth.

I can only imagine how frustrating it must have been for every girl growing up, loving footy and not being allowed even the dream of one day playing for their team.

I was lucky, you see, I was born, designated as a boy, given a boy’s name and raised as a boy.

Though my assigned gender didn’t stick, I was afforded the same male privilege young males enjoy growing up - including access to that dream of one day playing for their team.

I was rubbish at football, so of course it remained a dream, but at least I was allowed to dream it.

When it was announced that the Tigers would be given an AFLW license in 2020, I immediately relegated my AFLW team, the Giants, into 2nd and began to focus all my attention on Richmond again.

I loved watching the VFLW team in action last year, mostly streaming their games, because living in Sydney, I was only able to attend one match live (we won!)

I have loved the AFLW since its inaugural season, I’ve found joy in watching AFLW teams from clubs I do truly hate in the AFLM, even finding myself barracking for them (prime example last year’s Grand Final with me barracking for Carlton of all clubs!).

What I don't get a LOT of is to see the effect the AFLW is having on live crowds.

Crowds in Sydney are different to crowds in traditional footy states, they've always been a bit less rusted-on, for better or worse, they contain fewer ferals.

So the AFLW crowds in Sydney, though significantly more gay (woop woop), are about as polite & supportive as the AFLM crowds.

Something that has not been lost on me is that 2018 was the first season my daughter told me that she wanted to play footy like her brothers.

Prior to 2018, she'd shown little-to-no interest and I have no doubt seeing herself represented in her colours (the Giants) in the AFLW has made no small impact on her.

I love the flow of the game in AFLW. I feel like the differences in the on-field game from the AFLM make it better.

I love the hardness and endeavour of the players and seeing players who have not been given elite training, coaching and facilities since their early teens flourish on the big stage now that they have been given these opportunities.

I was SO EXCITED to be coming to Melbourne to see the Tiger's first official AFLW match.

Getting out of a rain-drenched Sydney was an ordeal, but once I arrived in the home of Footy, my week became a whole lot better.

I met up with one Tiger peep I’ve known from Twitter & met last year in Sydney, he introduced me to some Tiger peeps from Twitter I had never met before and later in the afternoon, in walked one long-time Richmond podcaster, true Richmond Twitter royalty on who’s shoulder I cried, early on the morning of October 1, 2017 on Swan Street.

Each and every person I met and caught up with at the Great Northern before the game and every die-hard die-hards I met at the game itself was lovely and my life is that much brighter (a shade of yellow & black) for meeting them.

There was a rapid exodus from the pub when a couple of folks looked at Twitter and saw the lineup outside the gates waiting to get into Princess Park (officially it’s name) and though I hung out for a little longer to finish my second pint...OK maybe third, when I arrived at Carlton’s spiritual home and saw so many girls, Mums and young women kicking footies, smiling and enjoying EVERYTHING that footy has to offer and my heart grew a size larger.

My cheeks aching from smiling so much, I bought a brand new AFLW Richmond guernsey (already in the travel budget), picked up my Richmond Members cap for myself & my eldest (alas my only Tiger child out of three) and entered the stadium.

I’d never been to Princess Park before, so I had no dark memories from the spiritual home of the Carlton Football Club, nothing associated with this ground except that it would be the venue for Richmond’s first AFLW match.

I sat close to the cheer squad and watched more young girls than boys hanging over the fence cheering.

I was warmed to see Richmond Football Club's full support behind the AFLW team - senior AFLM players were in attendance, the President, the CEO and even Wadaiko Rindo, our  jungle drummers welcomed the team to the field.

The match, unfortunately, went according to how I feared it might, with last year’s runners-up showing exactly why they made it to the 2019 Grand Final and the Tiger newcomers struggling with nerves and the occasion of their club’s first AFLW match.

Even still, they played some beautiful passages of football and I loved their heart, I loved their effort and I can’t wait to see them play again.

After the game, the surface was opened for Kick-to-kick and for the first time I’ve ever seen, I saw more Mums and daughters kicking than fathers and sons (and they were bloody good too! Trust me, NSW has a LONG way to go).

It was a fantastic experience and I realise now that over the course of yesterday, my heart grew three sizes (with thanks to Roald Dahl).