The Roar Of The Crowd

The Roar of the Crowd 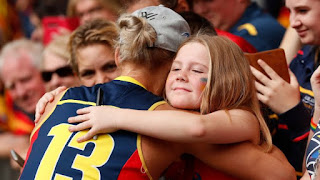 The crowd erupted as the oval ball flew through the tall goal posts.

The sound was almost unbearably loud. 53,034 people were all yelling at once!!

It was so amazing for that many people to come and enjoy the superb spectacle.

The game had many highs and lows for different players and spectators, but overall it was a definite high for the women’s game.

Tomorrow, for the opening match of the 2020 season, the crowd is expected to be large and people have been warned to come early to make sure they get seats.

The game at IKON Park is going to be big, with Richmond making their debut in the league and highly ranked Carlton looking to get their season off to a good start.

Many women’s games, in all sports, are often played in smaller stadiums.

I think Casey Stoney, the coach of Manchester United’s Women’s team, had a really good response to this.

This is great because if we move straight to grounds that seat 80,000 people we won’t fill them week in, week out.

It would look silly.

If the games are played in big stadiums every so often, like a grand final, and the games are well publicised, they will get large crowds.

We just need to build towards it.

The louder the roar, the more momentum we give these players, the bigger the game will get.