The End and the Beginning

The End and The Beginning 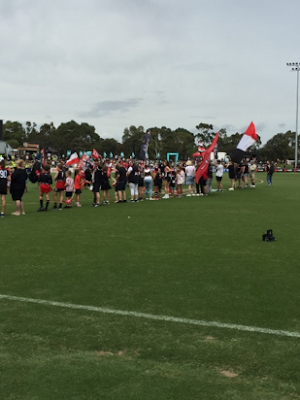 She became hooked as quickly as I had when I first moved to Australia.

At the next game she asked where the ladies were, and I had to break the news that ladies couldn’t play for St Kilda.

She simply looked straight at me and told me that “wasn’t fair”.

But I’ll be honest, I’ve only ever had a passing interest in female sport mainly driven by a sense of patriotism during the Olympics or the world cup of which ever sport it happens to be.

My four-year-old had made me question myself and see things from her perspective.

Twelve months later I had the pleasure of explaining to Grace that St Kilda would have a team that girls and ladies could play in.

She was over the moon and had all her Saints stuff out and ready to go.

In the months since then Grace has not stopped talking about the ‘ladies’; the club have been fantastic in providing us with information, letting us attend training, taking photos etc.

And what does this have to do with today?

To be honest, not a great deal.

But I do not doubt that there are many, many other young girls who have similar stories and for who today couldn’t come soon enough.

Parking in the side-streets of Moorabbin 90 minutes before the siren it soon became apparent that today was different.

There was a buzz in the streets and several people were in their gardens talking to the passers by and asking about the game.

Approaching RSEA park we saw families, groups of young people and older people alike: all had smiles on their faces, the excitement and anticipation was almost palpable.

St Kilda Football Club had done a great job of preparing for the day.

The ‘boys’ were out collecting for Bush Fire Relief, there was face painting for the kids, rides, food & drinks; something for everyone.

We waited by the main building as Grace had the honour of being part of the Guard of Honour.

The staff were fantastic and welcoming, and the atmosphere seemed to be building.

The look on the kids’ faces was something to behold.

And then it was time; the song rang out around Linton Street, the fireworks exploded, and St Kilda were home.

It was clear from the opening minute that the conditions were far from ideal for footy.

It was hot, humid and blowing a gale.

The Doggies came out of the blocks fast and took advantage of the conditions to race away to an early lead.

The Saints looked a little slow, made a few mistakes and didn’t seem capable of dealing with the pressure and superior ball skills of the Dogs.

For the remainder of the game the conditions had a huge impact but the teams were fairly well balanced.

The Saints grew in to the contest with some huge hits, a goal for Jess Sedunary, excellent speed and pressure from Kate McCarthy and a game high 18 possessions for Georgia Patrikios.

Unfortunately it wasn’t quite enough, as the Doggies ran out 39-14 winners.

You might question why the coverage of the game was so short.

Today wasn’t really about the game.

It was a celebration.

AFLW has come in for some heavy criticism from those who see no place for it in the footy landscape.

I often hear things like “the scoring is so low, the quality is poor, they don’t hit hard enough”.

If you’re reading this and have that opinion, I challenge you to get to a game and see for yourself.

Yes, the score was low today, but the skill level was high, the hits were huge and the passion was evident in every single one of the players on the field.

St Kilda has had some good times over the last decade or so but was gone through some very tough times too.

The move to Seaford was seen by many as a disaster, playing at Docklands has been financially restrictive and for some, Moorabbin has always been home.

Today they showed the community what they’re about; from the lead up to the game to posing for photos with fans after the siren, today was nothing short of a phenomenal success. 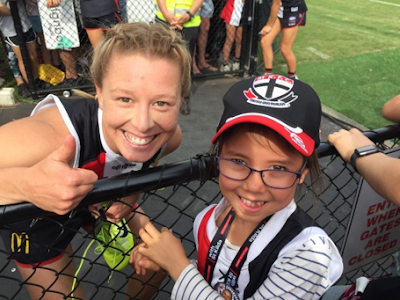 Over 27 years ago Moorabbin last witnessed a game of football.

Today the footy was back at Moorabbin and for some the long journey is finally over but for many others the journey is only just beginning.