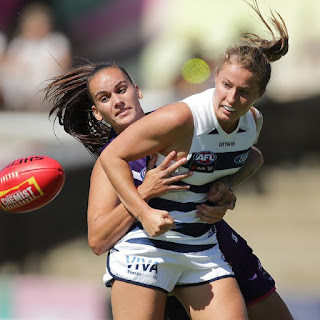 Waiting for the last game of the round to watch your team play is a special kind of torture that I imagine is used on footy fans in Hell.

Already, GWS has played its annual underwater home game, the Lions have pulled off a massive upset and the Magpies… well, the Magpies have won a game, so it feels like round four at the earliest.

In my experience, watching your team play is usually preceded by some level of confidence in knowing what is likely to ensue.

I am probably about to witness a bungle of epic proportions.

One of those three.

But enough about the men’s team.

What makes today even more torturous is that round one of AFLW is as unpredictable as it gets, especially with four new teams entering the fray.

Everything is different to last season.

Fremantle, for example, beat us by six goals last year, but lost several players to West Coast over the off-season, while Geelong was the only club not to lose a player during the expansion club signing period.

This will also be the first time that the Cats have had Nina Morrison and ‘Rocky’ Cranston in the same midfield at AFLW level.

This gives me some hope, but I’m still not brave enough to tip the Cats.

As the first bounce draws nearer, I can’t help but ask a million internal questions that can’t possibly be answered yet.

How will Freo fare after losing Dana Hooker and Kellie Gibson to West Coast?

Have the Cats improved their attack since last season?

Is it too late to move Cambridge to Geelong so we can get Erin Hoare back?

It’s also rather worrying that we delisted our leading goalkicker last season and she is now about to play against us.

With no disrespect towards the twelve teams that have already played this round, it’s my personal belief that the AFLW season hasn’t really started until you hear Fremantle Oval’s iconic siren blast through your TV speakers for the first time of the year.

Today, it means the Cats are back. Finally!

Freo’s forward line is one of the most potent in the league, and with Meg McDonald and Anna Teague out, the Cats need someone to step up in defence.

Two early intercept marks reveal that someone to be Maddy Keryk, who repels a couple of Dockers attacks before Duffy kicks the first goal of the game.

The next centre bounce is a welcome reset for the Cats, after the Dockers had locked the ball into their forward half for the first five minutes.

It now becomes clear that Geelong’s new style of play is very different from last year. It’s clean and precise.

She kicks it well, and the Cats have their first goal of the season.

The first quarter comes to an end and a glance at the stats shows what the Cats are trying to do.

Play resumes, and suddenly, Cranston is streaming towards goal with an opponent in hot pursuit.

Rocky bounces, handballs to herself and, of course, slots the goal from 30 out.

It’s the most Rocky thing you’ll ever see, and we’re in front.

Freo hits back, first through Duffy, followed by a brilliant goal from Roux, who I instantly decide is going to be a Rising Star contender.

The Dockers are getting inside 50 after inside 50, and the Geelong defence has done extremely well to concede just the two goals for the quarter.

Finally, the Cats get the ball out of their back half.

They’ve struggled to control the game so far, but when they do, they’re hard to stop.

With some clean possessions they begin a counter-attack.

Goal-scoring opportunities have been few and far between for the Cats, but they’re certainly taking their opportunities when they get them.

At the main break, Geelong trails by a point after the Dockers dominated play for most of the half.

Imagine what the Cats can do if they play more of the game on their terms.

We get another glimpse of Geelong’s clinical ball movement and, to the delight of everyone who loves Geelong, AFLW or just good stories in general, Nina Morrison kicks a set shot goal in her first game back from an ACL injury.

Alas, the Dockers get a quick reply.

Crocket-Grills has been outstanding by the way, despite her tongue-twister name that forces me to simply refer to her as ‘Julia’ in any verbal communication, hoping that sufficient context has been provided to distinguish her from the former Prime Minister.

I should mention (or brag, more accurately) at this point that Kiara Bowers is the captain of my fantasy team, hence I am both pleased and horrified by the devastation she is wreaking on my poor Cats.

Somehow, scores are level at the last change.

Fremantle has had three times as many forward 50 entries as the Cats.

If I’d been told before the game that we’d be this reliant on our depleted defence, I would’ve braced for the worst.

Fortunately, it has held up well.

A series of misses puts Fremantle up by four points and my heart rate up even further.

One goal would steal it, but one goal the other way would be fatal.

Then, Duffy breaks through.

She has four goals, but I’m too disappointed to be impressed now.

Freo’s clearances are so good they have to be seen to be believed at this point.

A goal from Houghton seals it.

Geelong had done well to keep up for most of the game, but this feels almost inevitable.

There’s no shame at all in losing to a side as good as Freo, but it would’ve been nice to start with a win.