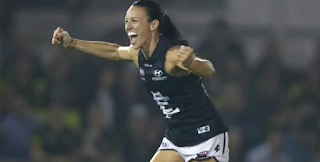 At least that’s what it felt like in the stadium.

The energy was electric, like a thousand volts charging through our veins.

In the Carlton change rooms, 21 players hands were put together and 21 players cheered.

When Carlton scored the first goal of the game the cheering was as loud as thunder and the energy was like sizzling lightning.

The noise as people stamped their feet vibrated like falling rain.

A storm was brewing.

Carlton started to pull away but the Richmond fans didn’t stop cheering for their debuting team.

It must have helped because Richmond pushed and pushed and then in the third quarter, forward Sabrina Frederick booted the ball through their goal.

The storm was in its full power.

Richmond had finally scored their first goal ever in the AFLW!!!!

If you had been walking outside the ground at that moment you would have looked up at the sky and expected rain to come pouring down.

The match was extremely energetic, and it was amazing for so many people to be involved in a fantastic, well fought game.