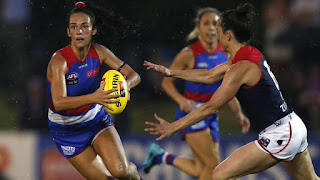 It’s taken me a while to get around to writing about this week's round of football.

I’ve been too busy patting myself back together after meeting the absolute living legend that is Susan Alberti (!!! I’ve never felt more like a child than in that exact moment).

I must admit though, my conversation with Susan was by far the highlight of the night.

My poor girls, what were they doing?

Were they aware the game was happening?

Were they too flailing around having been in the presence of their hero?

From the moment the whistle was blown they looked behind.

They were always second to the ball, there felt like very few moments we were on.

It was frustrating to watch, what happened to the clean passages of play they showed off last week?

Perhaps the rain was to blame?

After all, they’re used to playing in summer now, perhaps the ball was too slippery.

Well in the words of Susan, “they should be able to play in any weather.”

Despite the disappointing Valentine, there is no taking away from the great games Mcarthy and Ferres had.

A mammoth 15 and 14 disposals were had by each, while good old trusty Ellie Blackburn was hot on their heels.

However, my Valentine heart would have gone to Hannah Scott. I can’t tell you why but she had my eye all night.

Every time I was in despair Hannah emerged as if to say, fear not I am here.

All in all, I must admit I was happy once the game was over. Perhaps love will be in the air again at this week's Pride game.

See you there, I’ll be the one in the pride guernsey ;)