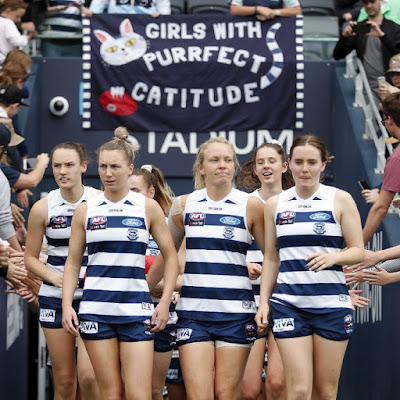 Going to the first Cats home game of the year is always exciting.

Prior to having an AFLW team to follow, Geelong fans typically had to wait until mid-April or later to see the Cats play for premiership points at Kardinia Park (the AFL has long been allergic to scheduling men’s games in Geelong early in the season) but fortunately, AFLW gives us an excuse to be here in the middle of February.

The line to get into the Brownlow Stand seems to stretch almost halfway back to Melbourne with only 15 minutes until the bounce, but a walk around to Moorabool Street reveals the queue to be much shorter on that side.

As I take a seat and wait for the game to begin, I’m racking my brain for the last time I sat in the Hickey Stand.

Then I remember. Geelong’s inaugural VFLW game, on a cold, rainy day in 2017.

It was from about where I’m sitting now that I saw a Cats women’s team run on to the ground for the first time.

It was from here that I saw Anna Teague take what seemed like a hundred one-on-one contested marks at full back; the Hawks almost unable to get the ball past her in four quarters of football.

It was from here that I saw Lily Mithen dominate in the middle and Jordan Ivey slot an incredible set shot goal from the boundary.

Geelong won 58 to 2 over Box Hill that day, and it was the game that compelled me to take more interest in the VFLW team than I’d expected to.

With many of the club’s current AFLW players coming from the group I watched achieve huge wins and suffer demoralising losses in the VFLW, my emotional attachment to this team is probably twice as strong as it would otherwise be.

While many see this side as only a year old, I see it as a group of players and a coach who learnt from that first loss by ten goals to Diamond Creek three years ago and every other loss since, to become the team it is today.

The Team It Is Today has, unfortunately, conceded the first goal.

The Cats are playing well, though, and a forward 50 throw-in is gathered by Purcell, who – with no hesitation – boots the ball towards goal and is rewarded with six points for her accuracy.

If Olivia Purcell is only a glimpse of the future of AFLW, I think the league’s critics will be much quieter in a few years.

Mostly Geelong supporters, with a loud drunk in the next bay vocally supporting the away team.

Higgins (whose recent surname change prevents me from describing her as an ‘Orrsome’ forward) adds another goal to increase the lead to seven points, but not long after, Denby Taylor is coming off the ground injured.

Injuries are always bad news, but this is a huge blow to a defensive unit already missing Meg McDonald and Anna Teague.

The second quarter has barely begun when Purcell roves a Brisbane hit-out and kicks a reverse checkside goal.

Seriously, what can’t she do?

Yes, that’s what we’re going to call it.

purcelling (verb)
Present participle of purcell – to surpass all others, even those who may be excelling, in a manner typified by Olivia Purcell.

Geelong leads by 11 points at the start of the third term, but Tawhiao-Wardlaw kicks her second goal of the day for Brisbane to bring the margin back to five points.

The Lions have locked the ball into their forward half. It’s looking like the same story as last week for the Cats, who are badly losing the inside 50 count.

Conway slots an easy goal, and the Lions are in front.

Geelong’s makeshift defence had done well to keep the Lions goalless for half an hour of play, but Brisbane’s relentless forward pressure is taking its toll on the Cats defenders.

The ball has spent a ridiculous amount of time in Brisbane’s forward half and the Cats simply can’t hold off the inevitable any longer.

A third goal to Tawhiao-Wardlaw early in the final quarter seems like the sealer for Brisbane.

The Cats finally generate some more goalkicking opportunities, but fail to capitalise on any.

A goal from Bodey completes a 32-point turnaround for the Lions.