Exorcising the Casey Demons and Outboxing the Roos

on February 10, 2020
The lead up to first match of the season there's always excitement, nerves, anticipation, concern, overthinking, lack of sleep - and that's just the fans!
This weekend the mighty demons were kicking off their season against the captain's flag favourites the kangaroos. Coming off an amazing debut season in 2019, the roos were unlucky to miss out on finals thanks to the - not my favourite - biggest farce - conference system.
The dees have been hit hard in the preseason by injury and my personal favourite human Bianca Jakobsson stepping away from AFLW for about 8 weeks - also known as the entire season - to concentrate on her dream career. I have finally accepted this decision, only a minimal tantrum was thrown and a few tears shed... haha
Despite the setbacks, I was still confident that the dees would take home the win in round 1. Most of you know I head down to watch the girls train every Tuesday, to show my support for the girls but it's also my way of getting away from the real world for a couple of hours. Footy has always been a great form of escapism for me.
Dad and I started our road trip out to Casey with the now mandatory car selfie. Mum was a late out - she was unwell and shattered she wasn't coming along. We got to the ground with minimal fuss, a lot of shaking our heads at the crazy drivers out there.
We made our way into the ground and to what has become our spot, on the outer, just inside 50m to the Demon Army end. The kangas were out there checking out the conditions, there was a footy clinic taking place on the ground too, I hope the kids had fun! In true Nik form, I left the sunscreen in the car. Thankfully the amazing dees sponsors were handing out sunscreen and sunglasses! Amazing! Life savers right there. I was a good girl and applied the sunscreen and as per usual I missed spots. Hello glowing red neck and chest...  FYI sunscreen tastes gross, don't lick your lips after you've applied it.
I settled in and waited for the match to start. Checked the socials and Dad and I were asked by an AFL photographer to pose for a photo.  No one asked us for an autograph so we assume it wasn't used...
Robbo was the MC for the day and was telling us all about the goings on. Thanks Robbo! The dees came out to warm up near us and you could tell they were switched on. Nothing was going to stop them today. Except maybe mother nature and her issue with wind. I noted that I love the training shirts that all the clubs have for this season. I'm on a mission to see if I can get one!
The wind was going to cause havoc all day, it obliterated the hard work of both cheersquads as their banners were no match for mother nature. Casey really isn't banner friendly. I really felt for the cheersquads. Shout out to all of you who put in the hard work so that the players have the banners to run through.
Both teams were out on the field and getting ready to go. I had my phone ready to film the first bounce, filming away and I got  a text message from mum telling me to stop filming and enjoy the game! Even at home, she was keeping an eye on me!
The first quarter was a hard fight. The kangas were kicking to the scoring end and kept the dees scoreless. The attack on the ball and the pressure on the player with the ball was intense. Neither side gave an inch. The standard was set for the entire match.
Ashmore and Bateman hit the scoreboard for the kangas in the first giving them a handy lead at the end of the quarter.
Despite being behind at quarter time, I knew the dees would bounce back in the second quarter. Harriet Cordner in the ruck was really doing an amazing job, her leap and competitiveness is totally underrated. The onballers were starting to get their hands on the ball and Tegan Cunningham was starting to make her presence known up forward. 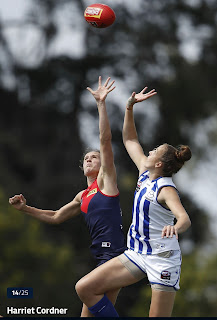 Maddi Gay, who was a standout for most of the match, reads the play well and her silky skills must make the forwards super happy when she's delivering the ball to them. Enter Kate Hore. One of the best games Kate has played for the dees. Her quick succession goals gave us the lead heading to half time. Her second goal came from some Eden Zanker magic in the pocket. That was something else. I may have been diagonally opposite to that pocket but I knew something amazing had just happened. Eden has that magic about her. 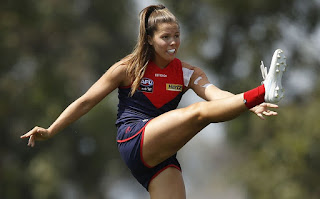 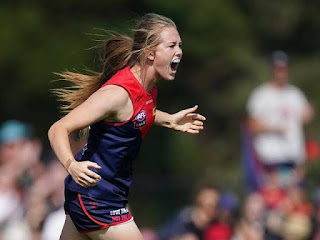 The third quarter was the cliched arm wrestle. The kangas were kicking to the scoring end and the dees defence was denying them as best they could. The kangas managed to kick 1 goal 1 behind in the quarter and the dees managed to score a behind into the strong breeze.
The dees were once again behind at the break by 5 points. The last quarter was going to be a high pressure, keep your cool, back yourself war. Eden Zanker would kick a goal that would give the dees the lead again and from there most of the play was inside the dees forward half. I am fairly certain I helped Eden kick that goal. I was bouncing around yelling out to her from the other side of the ground to run like the wind and kick the goal. I'm so glad she listened.
The dees defensive pressure kept the roos scoreless in the second and final quarters. Perhaps the wind played a factor in this, but I'd like to think it was purely the dees relentlessness to allow the roos to get a shot on goal.
The dees won by 2 points in the end. 2. My heart rate must have been in overdrive. That last minute beyond the 15 minute mark of the last quarter had to be the longest minute ever. Like, ever! Dad and I were just saying someone blow the siren only 1 goal has been kicked!
Then, the most beautiful sound, the siren went! We jumped up and down, Meaghan who watched the footy with us, we were hi-fiving and super excited. We realised this was the first time that she and I had watched the dees play down at Casey together and they won. This win for the dees was their first win at Casey since the 2018 season.
Yesterday the dees exorcised their home ground hoodoo that cost them a finals berth in 2019 and they outlasted the flag favourites in a battle that left me exhausted just watching it.
After the game I was emotional. I was all teary, because I knew how hard these girls have been working in the preseason and how determined they are to make this season their own.
What a way to start it than with a gutsy win, in trying conditions, against one of the most respected and feared teams in the competition.
Next week we head to the Whitten Oval to take on the Bulldogs. I still maintain this should be the season opener match being the two pioneering teams, but I'm going to enjoy the battle and the rivalry that is building between them.
Keep your eye on the red and the blue in 2020. ❤️💙❤️💙 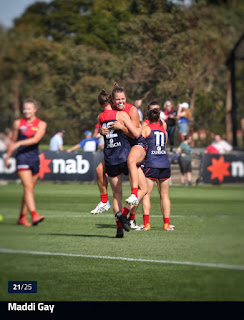 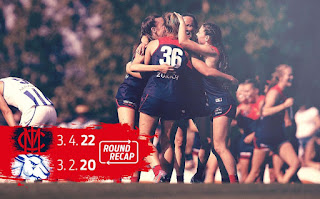