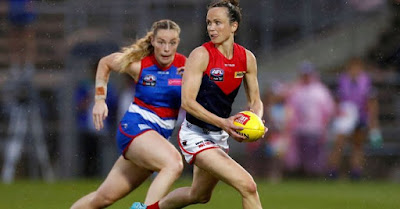 Friday night wet weather footy is the perfect nightmare for the broadcasters of AFLW.

I’d imagine they pencilled in another low scoring affair.

Luckily for them the Demons had an agenda and that was to apply big pressure and play some amazing footy.

Whilst they peppered the goals and didn’t convert as they would have liked, they looked dangerous each time they went forward.

The last time they played at the Whitten Oval Brooke Lochland broke every demon heart with her winning shot on goal in the dying stages.

But from the very first bounce it was clear history wouldn’t repeat (largely because Brooke didn’t play), the Dees girls attacked the ball and hunted in numbers, applying a pressure that didn’t give the Doggies any chance to take a moment to make a decision.

Paxy’s snap around the body goal was the perfect start for a big push forward.

Got me up out of my seat!

The doggies only score in the first three quarters came courtesy of a 50m penalty against one of the Demons Irish sensations Sinead Goldrick in the dying stages of the first quarter.

With my red n blue goggles firmly on here, I protest that the umpire confused Goldrick then punished her.

The replay showed she was trying to return the ball, then stopped, turned to the umpire and went to hand it to him.

And I took exception to the commentators gleefully giggling at the “Oh the Irish and not knowing the rules” predictable and boring line.

You can’t say it’s a boring time when Sinead is on the ground – anything can happen!

Wait until she breaks away and you all get to see her magical dash at work!

Libby Birch was a marked woman, that was to be expected and that continued on from a VFLW match in 2019.

I don’t care much for the arguments for or against the conversation from Libby or her former coach or teammates, but when a player leaves a club and there’s no love lost between a player and the team, this isn’t something that’s new.

A player is entitled to an opinion as much as anyone in the media. I did take exception to a deleted tweet from her former coach.

Whoever it was intended for, it wasn’t what you’d expect from a coach.

That’s all I will say.

I’ve had many passionate Doggies fans share their opinion on the topic with me, they kinda forget that this is my opinion too.

And my loyalty lies with any player who is wearing the jumper I bleed red n blue for* (*AFLW only. I have very different views when it comes to AFLM. Hello Bugg ya thug)

There was a threat of storms hitting all night and the humidity was insane.

You could see the players were struggling with the conditions for the most part, which is why I was so proud of the 4 quarter effort from the Dees.

Casey Sherriff’s goal off the ground in the third, I’m claiming that goal, I yelled out from the stand at the end other end of the ground to KICK IT OFF THE GROUND!!

Clearly she heard me and made the right decision to do so.

Followed by a goal from Maddi Gay, who’s skills continue to impress me with each game she plays.

The shots on goal by Kate Hore, Aleisha Newman, Niamh McEvoy and Shelley Scott, if half of those had gone through the middle the match would have been a belting.

There was a giggle during the game, the piggyback tackle that Harrier Cordner received was a highlight, but the marking prowess of Shelley Scott was really something.

Marking a footy in the wet is difficult – I know – hello fat lip when I was a kid – so to see Shelley take telling mark after mark really was something special.

The match was completely entertaining from a Dees tragic point of view, especially sitting in the stand amongst the Doggies faithful.

I behaved myself as best I could. I was fortunate enough to sit with some amazing mates, Em, Kat, Andy and Meaghan and I think all of us were enjoying the match.

Some Falcs masters teammates sat behind us and catching up with them is always great, especially after the match.

Also catching up with Baz is always lovely.

I did have an interesting encounter with a Dees fan who, let’s say, had a little too much spirit on the night.

I understand that being a Dees fan can lead you to drink, but not with the AFLW. (I hope she made her way home safely and slept off that spirit that was poisoning her enthusiasm for the MFC.)

The night ended with a lot of laughs and chats with amazing people, saying hi to the players I adore and am lucky enough to chat to at training.

The train ride home was a good one as I read up on the reports of the match.

Living in the heart of Doggies territory,

I realise that my family’s decision to support the MFC was the best decision ever.

Each week the Dees girls make me proud.

They’re making my heart beat true more than ever.

We’re coming for you Saints.

The battle of Heaven and Hell is shaping up to be an amazing one.

Whilst I can’t be there, I will be there in spirit, cheering my heart out.