Good old Collingwood forever... blasts thru at 6.30am, my phone has that set as my alarm & ringtone lol. I'm awake & excited because I'd waited all weekend to finally be able to say GAME DAY, yes okay I was excited when I'd gone to my first AFLW game for 2020 at Casey Fields the day before, but today was different because it was game day for my favourite team my mighty Pies girls.

After waking up and getting all decked out with my Collingwood AFLW gear, Guernsey, cap, polo & scarf which has every present Collingwood AFLW players badge on it, my friend & I made the short walk for Maccas brekki, before getting in the car to make the half hour drive to Collingwood spiritual home of Victoria Park to ensure we got a car Park, we arrived a little before 9.30 & besides staff everywhere setting various things up we were the first fans to arrive. There were no gates to wait outside so we just walked in to get our prime spot near the Collingwood players race & interchange bench. 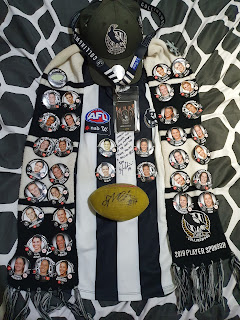 Hours became to pass and the excitment levels began increasing more & more & finally official match day events started happening the welcome to country, the ringing of the Victoria Park bell & the siren blasting to signal the start of the game.

I was excited with both nerves and butterflies & having experienced 3 previous round 1 heart breaks myself & our core group of loyal fans didn't want to go through another one. West Coast had the wind in the first Quarter, the pressure was and intense early on. West Coast wrote their first piece of AFLW with Dana Hooker slotting through their first ever AFLW goal. The siren sounded for Quarter time and the scores were West Coast 1.2.8 and Collingwood yet to score. Us fans were a little worried, but we knew we had the wind in the 2nd.

The 2nd Quarter saw the physicality & intensity rise up another level from our girls & Chloe Molloy kicked our first goal of the game & in her first game of AFLW in 693 days after missing the entire 2019 AFLW season with a Lisfranc injury she sustained in the 2018 VFLW preliminary final. We were so happy & celebrated like crazy when Chloe kicked the goal. This photo was taken by my friend Callum O'Connor of myself and Andy in that little celebration. 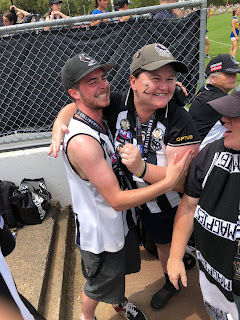   Soon after our new Irish recruit Aishling Sheridan marked the ball & then found a target inside 50 with Chops aka Jaimee Lambert who marked right near the goals, played on & kicked out 2nd.

As the game rolled on, us fans were beginning to feel we may finally break our round 1 duck, but it wasn't over yet. My favourite & the player I sponsor Steph Chiocci slotted thru a really good run on goal against the wind in the 3rd quarter which was a great moment for her 20th game.

Bri Davey sent a scare through the game nearing 3/4 time when she came down with what looked like a serious injury.

Thankfully (on Monday) we have since been told it was just soft tissue but will be a test & have to get through training to play against her old mob this weekend.

2 more goals were kicked by the Pies girls 1 to Sarah D'arcy & the other Sharni Layton (kicking her first ever AFLW goal) who is really gonna be one to watch this year, her development during the VFLW last year has been phenomenal.

The siren sounded for full-time, WE DID IT WE FINALLY BROKE OUR ROUND 1 DUCK!!! Good old Collingwood forever came blasting over the speakers, the girls got to sing in the middle of Vic Park & shower a few girls in the winners circle, then came around to their all fans with big smiles for photos, autographs. A strong 6,100 was recorded attending the game.

Commiserations to West Coast, you gave us a fright in that first Quarter & gave it a red hot crack, I know you'll be better for it & get better as the season continues.

After the past 3 seasons of been winless & sitting either bottom or the near bottom of the ladder, its so good to FINALLY start our season with a win & also claim top spot in the conference B ladder.

I know it’s only round 1 but I have a good feeling about where this team Is going this year under new coach Steve Symonds.

This weekend round 2 is going to be a test for us & another chance for us to break another duck hopefully beating Carlton for the first time at AFLW level. We know how to win at Ikon Park, we won our recent VFLW premiership their last year, which will put fire in the 13 premiership girls on our list going into this weekend.