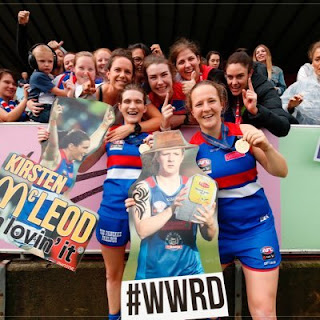 Comments from Nicole Livingstone on Sunday in response to Bec Goddard’s criticism of the AFLW has left a lot of opinions floating around the internet.

Specifically, I was interested in her comments on the league’s ability to liaison with players in relation to their “other jobs” and her apparent shifting of blame onto the Brisbane Lions for Jess Wuetschner’s recent lightning strike.

It’s this exact separation between players’ professional football and outside careers that is concerning.

This year saw Hayley Wildes leave the Western Bulldogs to focus on a non-playing role she gained with Melbourne United.

While Bella Ayre never quite hit her strides and set aside footy to focus on her dream of being a police officer.

And there are so many more stories of players retiring for work, or dual-sport players leaving the AFLW for full-time professional contracts.

However, in all this talk of players getting paid and what the AFL is or is not doing, there is a third party we are too keen to forget about.

Players outside employers are being asked more and more as we get deeper into the AFLW’s life.

Players are, rightly, pressing for longer seasons, and the AFL has agreed to increase the home and away season to nine games by 2022.

However, as the seasons lengthen, so too does the time players are required to be absent from work.

In 2020 alone players are taking up to 14-weeks unpaid leave to meet their AFLW obligations.

With most full-time workers accruing just 4 weeks of leave annually, that leaves employers with workers requesting up to ten weeks unpaid leave.

Now depending on a player’s occupation and employer, it is reasonable to see why even the most supportive of workplaces will become stretched to approve such a large leave of absence.

With players hailing from a large range of industries the reality must be faced.

It is simply not economical to hold an employee that consistently is unavailable for ten weeks a year.

This problem is amplified for those working in industries in peak operating season through the summer (tourism, public services, teachers).

Quickly the league will have a significant problem on its hands, with the potential mass exodus of players unable to meet club and work hour requirements.

There’s no easy path towards full-time contracts for AFLW players.

Until the AFL commits to monetising these games and using those earnings to help fund player contracts we will continue to see players leave for more stable career options.

The unfortunate reality in all this is that not every player in the AFLW has the privilege of earning more through promotions and sponsorships such as those Chiocci, Brennan, and Pearce are now accustomed to.

This is not a criticism of them, just a fact that places them in a better financial position than many of their teammates.

Despite a mild increase in pay year on year for AFLW players, if the system continues as it does today, the financial impacts of playing AFLW will be noticed.

And if it doesn’t change soon, the question will no longer be are you good enough to play, but can you afford to.