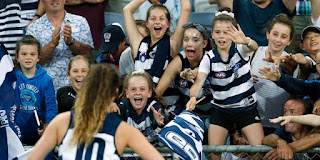 I've always loved footy.  I was practically born wearing a Geelong beanie and my bib had a Cats logo on it.

My Mum has been a huge Geelong fan since she was a kid.  She was there in 1963, in the standing room section from 9am to watch our 3rds, 2nds, and then the 1sts all win the flag that year.

We went to countless matches together (dragging along a reluctant Dad).

They would have the car ready the second my netball match finished on a Saturday morning so we could get going up the freeway for the two hour drive to the MCG.

And later when we had memberships, the three hour drive to Kardinia Park.  (Geelong well and truly made their money back on that free membership Mum won in a competition).

I moved to Geelong for Uni, and although I can't say how much my team influenced that decision, I was definitely biased.

I have loved my Boys for decades, I loved cheering them on, and yelling at terrible umpiring decisions.

But a few years ago it... started to fade.  I still love my boys, the atmosphere at the 'G still gets my blood pumping, but it wasn't the same somehow.

My Mum finally admitted that they were too old for the 3 hour drive and now my sister comes instead.

But it wasn't that, because I love having my sister to chat with, and it started before that.

I refused to acknowledge it and continued to cheer on the team, but there was a small hollow part.

Then I heard about a Women's exhibition match between Melbourne & the Bulldogs.

What was this?  I had to see, and so I went along to the Whitten Oval, dragging a friend who had no interest in football.

As I cheered the girls and tried to explain to my friend that it was called 'marking' not 'gripping' the old passion from my youth started to come back.

So I started following the news, for any scrap of women's matches. Then I found out they were starting up an AFLW league!

My beloved Geelong didn't get a spot in the first batch of teams, but I wasn't going to give up, I simply had to watch something!

Footscray was the closest ground to Geelong, so I became a Doggies fan.

Cheering for Katie Brennan and Ellie Blackburn, sitting so close to the ground you could reach out and touch the players, it felt like the old atmosphere from when I was a kid trouping out to the old grounds before everyone moved to the 'G and Docklands. (I sound like a grumpy old person complaining about “back in my day”)

I watched my Geelong girls develop in the VFLW and then enter the AFLW in 2019 with joy and pride.

That was MY TEAM, and as they ran out onto Kardinia Park for their first match I was a cheering kid again.

I still have a soft spot for the 'Daughters of the West' (and a membership to go with it) but Geelong is my heart and my home.

Now I want one more thing.

I want to see our girls (any of the teams) run out onto the MCG.  I want them to have 100,000 people screaming their names and to know what that feels like.

I don't know how to explain my love of football to anyone who doesn't know what it's like, to sit at a packed 'G.

To hear... to FEEL the crowd as they cheer on their teams.  I have no words for that, and that's what I want those women to experience.  To play on the best sporting ground in the world, in front of all their adoring fans.