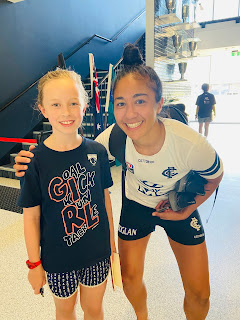 North Melbourne was out of the blocks fast and surprised the Carlton crowd by scoring fast
and having most of the possession in the first half.

After the game, fans stayed behind for ages to see the players and ask for photos and
autographs.

The players were chatty and friendly and talked to fans.

Carlton forward, Tayla Harris, talked for a long time to lots of different supporters, including me, answering their questions and thanking them for their support.

Times have changed and the game keeps progressing because now that you can see it,
many girls like me, are inspired to be it.