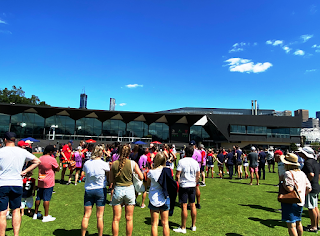 Saturday 25th January 2020, the middle of summer, when everyone in Melbourne is lining up at Rod Laver Arena to get sunburnt watching the world’s greatest tennis stars slog it out for the ultimate glory, I was creating my own little piece of history by catching a train to Jolimont station for the first time.

The walk from Jolimont station through the parks surrounding the MCG, over the walk bridge past the queue of sunscreen lathered tennis enthusiasts, towards AAMI Park was quite memorable.
It was great to see people smiling and jovial, all coming together because of sports.
Alas, I wasn’t joining these tennis people in their impending sun kissed,’quiet please’ joy, I was making my way down to watch a battle of the co-tenants in this precinct to fight it out in a footy practice match.
As I made my way down to Olympic Park Oval, I made note that it was a glorious day, that the crowd building was pretty good for a practice match, that there wasn’t any shade…
Em, who walked with me from Jolimont to the game, and I sat with some of our AFLW family on the hill that had steps / seats – like the Colosseum-eque vibe / design ummm… anyway we sat there.
I am happy to report this week I remembered to apply the sunscreen I brought along – unlike the week before where I forgot and subsequently got sun kissed… sun slapped more like it by the sun.
The game started out fast and hard as I think most of us would expect. Practice matches are really actual games but the AFL won’t award the 4 points to the victorious team at the end.
The players were getting into the throws of the season again, as were the fans. Ball! That was high ump! Did you see that?
When you are watching a scratch match, it’s also good practice for the actual season when supporting to remember that at any given point of the game you can get that  caught up you kind of lose yourself and find yourself cheering on like your team depended on it.
Also known as my barracking.
Chloe Molloy was on fire for the Pies early in the first quarter, fortunately for the Dees, Chloe’s sharp eye for the goals wasn’t quite on target.
Watching her back in the Pies side, you just know the Pies will be a force to be reckoned with this season.
Bri Davey, another magician when she has the ball in hand, was amazing to watch for the Pies, Sharni Layton was taking some strong grabs around the ground.
Sarah D’Arcy was causing the Dees some headaches up forward, poor Sophie Alexander had a headache of her own and a nice shiner after a collision with Dees superstar Harriet Cordner.
The Dees themselves looked fitter, hungrier and focused. Daisy Pearce and Libby Birch down back with Harriet Cordner and Meg Downie means the opposition will have a tough time leading into space I feel.
Speaking of space, look out AFLW – the Irish contingent is growing and their skills are amazing. Sarah Rowe was all over the place during the game, her ability to read the game is very Daisy Pearce like at times.
Knows exactly where she needs to be. I still maintain she would look even better in a red n blue guernsey.
Not to be outdone by this Irish sensation, the Dees own Sinead Goldrick when on an impressive sprint through the middle of the ground.
The space just opened up and she went off like a firecracker!
Trust the umpires to ruin this bit of magic because she may have forgotten to bounce the ball in her 50m sprint…. where is your sense of theatre!
Either way it was exciting to watch and Dees fans will be up and about for what Sinead can bring to this team.
Without our number one ruck Lauren Pearce and our super boot full forward Tegan Cunningham, many would have thought the Dees would lack marking power and height.
Yeah nah.
The marking power of Harriet Cordner, Jacqui Parry, Eden Zanker and Daisy Pearce is really something to watch.
Over the last couple of seasons, a criticism of the girls struggling to hold onto marks was for the best part, justified, but this season be prepared for some amazing marks.
I’m calling it now, Harriet Cordner will take mark of the year or be pipped by Jacqui Parry.
The ground ball work of Karen Paxman, Elise O’Dea, Maddi Gay and Tyla Hanks, I think on this day were overshadowed by a new superstar in the making – on ball rocket Shelley Heath.
She was everywhere! And like a certain Lily Mithen, getting taken high in a tackle is going to be a common thing this season. You just know it.
The half time break sent us on a quest for the bathroom. May I suggest that having more than 1 toilet to accommodate fans would be a future suggestion.
There may have been more available, some signage, also helpful.  We bailed on this attempt for the loo this time.
The walk around the ground was pleasant. Positives in everything.
Three quarter time Em and I made our way out to the huddles to catch a glimpse of what was happening.
The vibe in the Dees camp was upbeat, even with some injury scares put through the team.
That’s what you want to hear from your coaching staff and in turn your players, keep it positive. Keep the belief and back each other up.
I missed the beginning of the last quarter as I was peeing in the dark in the toilet that was finally free, but I read that Harriet kicked a goal! Hoooray! I hope this happens more throughout the season.
We settled back down to watch the last of the quarter, noticing that Aleisha Newman was helped off the ground after an amazing run down tackle inside the Dees forward 50m.
Our focus on the game slipped for a minute or two as we got the necessary group selfie with our people on the cut out hill. Andy  (@Torak) has posted this pic on Twitter. 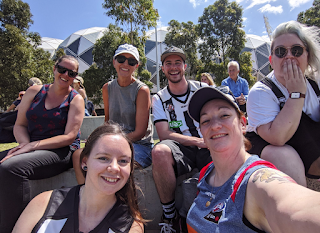 The Dees ran out victorious and I was very impressed with the hit out, their game style and their hard at the ball display, however, I was disappointed when A Grand Ol Flag wasn’t blaring on the speakers after the game.
Being a Dees fan for both AFL and AFLW, you will all know we generally don’t get to sing the song often during the men’s season, so it would have been nice to hear it so I can remember the words.
Picking out a best on ground is a tough one, Shelley Heath, Daisy Pearce, Libby Birch, but when it’s a team effort the 3 votes goes to all the players and the coaches for working together to get a win.
Practice match or not, the competitive spirit is in all players and the fans.
They’re ready. We’re ready. Are you ready for AFLW 4.0? Bring on Round 1!