Well, I'll tell you why I was up at the odd time on a Saturday morning when most people would be enjoying a sleep in after a long week at work.

It was a practice game for AFLW & I hear you saying, “PFFT Practice game whatever why bother?”

To me, I didn't care if it was a practice game or the joint training session the weekend before, it was the chance to see not only my Magpie Sisters but the Dees girls in an official hit out 2 weeks out before Round 1 of the AFLW season.

Well, our practice game was scheduled for a 10am start & there were no trains on my friend Dave’s & my train lines between Caulfield & Flinders street.

We agreed to both meet at Caulfield station, me coming from Hastings which meant driving to Frankston then a train to Caulfield & Dave getting a train from Hughesdale.

We met up at 8am then caught a tram down to Balaclava station which meets up with the Sandringham line which goes all the way to the city, quicker than a bus from Caulfield to the city then a train back to Richmond.

We arrived at our beloved Collingwood HQ by just before 9am & stood at our prime spot & Instantly got the sunscreen out as that sun had a bite to it very early.

We saw & spoke with some of our girls that weren't playing in today's practice game, poor Emma Grant has had troubles shaking off a concussion she suffered in the weekend before a joint training session with North Melbourne.

As the girls ran out for their warm-up we noticed black arm bands on both the arms of players, coaches and staff on both teams.

We soon found out it was to pay respect to Maddie Shevlin, whose Nanna had passed away. Maddie was very close to her Nanna, our love, sympathy & condolences reach out to her family at this sad time.

The crowd was building nicely & our crew that attends training regularly were getting excited for the first bounce.

The siren sounded to signal the ball up, what a beautiful sound a footy siren, onewhen we hadn't heard since the VFL Women’s Grand Final 125 days prior.

My Pie girls were dominating & applying a lot of pressure in the first quarter but couldn't get the ball through the big sticks.

The game throughout was very close all day, at times Melbourne hit the front by about 10 or so points, then my Pies got 2 quick goals to take the lead, it was a see-sawing game, but in the end Melbourne came away with the win by 15 points after some silly undisciplined 50s which resulted in 3 goals to Melbourne.

There were a lot of promising signs ahead of Round 1 for my girls, a lot of the youngsters particularly Alana Porter, Lauren Butler, were impressive as well.

I feel that Collingwood will be the most improved this season & we will be fighting for that final spot in the top 3 of our conference, last year we were decimated in the first expansion period, but with a season under a lot of the youngsters’ belts, the addition of Bri Davey coming over from the arch rival & a fit & firing Chloe Molloy back we will be a better team this year. 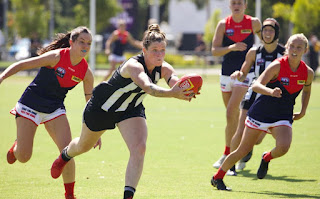