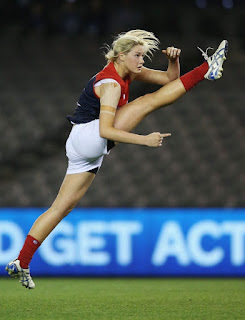 In the last decade or so the biggest area of growth in most sports seems to be women's sports and this is a brilliant thing.

When I was a child growing up the only woman's sport I can remember watching was netball or tennis or maybe the very occasional WNBL game but that was about it.

We are now just over a week away from the start of AFLW Season 4, and if you want any indication of how far woman's footy has come in this time look no further than last seasons grand final when we saw a packed Adelaide Oval when a crowd of 53, 034 people turned out to watch Adelaide win their 2nd Premiership in 3 years.

A decade ago you couldn't have imagined it, but it's true.

The first game of women's I was ever aware of was the women's exhibition games that Melbourne and the Western Bulldogs played, from memory it was played on a Saturday night and got a higher number of television viewers than an AFL Game on the Sunday afternoon.

Due to their outstanding football skills and work in the media players such as Daisy Pearce, Erin Phillips and Tayla Harris are now household names who the next generation of young people can aspire to be like.

The AFLW will have 14 teams this year and in my opinion the quality of play is getting better each season.

It will be interesting to see how the 4 new teams (West Coast, Gold Coast, the Saints and Richmond) will go in their first year.

We don't have to wait long now for the season with the first round starting on Friday night the 7th of February with the opening game between Richmond and Carlton.

There are more teams and more games this season than ever before, lets hope that the 2020 AFLW league season will be the best season in the short history of this great league.